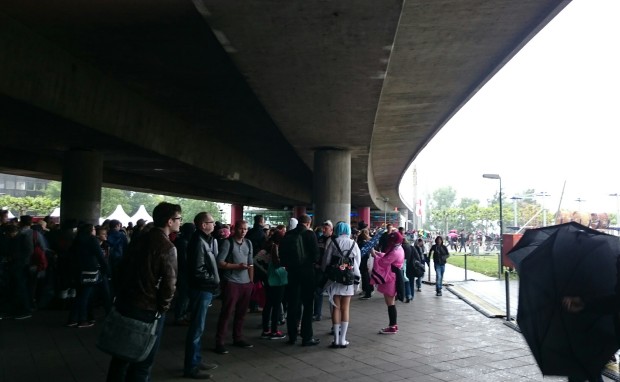 END_OF_DOCUMENT_TOKEN_TO_BE_REPLACED

I’m writing this article in English because there was an American girl with us, who does know some German, but it would only be fair to not make her guess at most of my babblings. ( Zum deutschen Artikel mit Fotos. // Click here to get to the German article with photos.) FYI: I’m talking about „Japan Day“ 2015 in Düsseldorf, Germany, a yearly cultural outdoors fair, which also attracts tons of anime and manga fans – lots of them cosplaying as characters from either medium.

Well. Japan day in Düsseldorf. I was so excited! I had planned this for months and it was gonna be so cool – at least in my head. What I didn’t take into account were two things: The weather and other people. As I mentioned, I did not go there alone. Since I wanted to try myself at videoblogging, a good friend of mine had offered to be my camera guy. Really awesome, especially since he knows next to nothing about any anime besides Dragonball and maybe Pokémon. Unfortunately (timing-wise), a week or so before J-day, he told me that a friend of his from the US was coming over and asked me if she could come with us. Sure thing, the more the merrier, I thought. Two days before J-day another friend of his said she would come with us, since she is also friends with „the American girl“ as I called her. I have to say that both of them are really cool and funny and I was happy that I got to know them. But why not under these circumstances?! :D

„What is she talking about?“ you’re probably wondering now. Right. A day before I asked whether we wanted to talk about what our plans are because (hey, did I mention I had a work related trip the two days before that?) I did not have time before to really think about when we should be where. My friend said we could meet up, but his friend was already there, so she would be with us. No worries, as long as we can plan this while we’re grabbing a coffee with your friend. Which we didn’t. Instead we got dinner and talked and at around 10 in the evening I decided to go home because I had not prepared at all and we just decided on a time to meet the next morning, while we were still in the tram. END_OF_DOCUMENT_TOKEN_TO_BE_REPLACED

I’m going on an adventure!